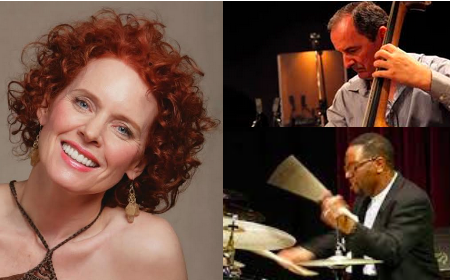 Lynne Arriale’s music lies at the synaptic intersection where brain meets heart, where body meets soul. She is one of jazzdom’s most intensely unique voices. – JazzTimes

Pianist/composer Lynne Arriale’s career is graced by a love of melody and a joy of musical discovery. Arriale has performed on international concert and festival stages over the past 25 years. The consummate storyteller, she immediately connects with her listeners. JazzTimes wrote, “She achieves a special, deep connection with her audience, and the energy flows both ways. Arriale’s emotional authenticity allows her audience to feel and think along with her.”

At the core of Arriale’s appeal is her ability to communicate with her band and listeners. “The poet laureate of her generation” (Jazz Police), her performances and recordings with her trio have led to comparisons with the great trios of Bill Evans and Keith Jarrett, yet she has been consistently praised as having a “singular voice” as a pianist, leader, composer, and arranger. “I really can’t compare her to anyone,” said recent collaborator and multi-Grammy winner Randy Brecker. “Her music transcends the word ‘jazz’ – it is just pure music.”

Arriale was the first prize winner of the 1993 International Great American Jazz Piano Competition, and soon launched her touring and recording career. Her 14 CDs as a leader have topped the Jazzweek Radio Charts.

During his illustrious career, bassist, Darek Oleszkiewicz has performed and recorded with the greatest masters in jazz, including such artists as Brad Mehldau, Billy Higgins, Pat Metheny, Joe Lovano, Eddie Henderson, Charles Lloyd and John Abercrombie. He has recorded approximately 100 albums and performed throughout America, Europe and Asia. Several of those recordings were nominated for Grammy Awards. You may have heard Darek in the past at the Sequoia Room and know how outstanding he is!

Drummer, Lewis Nash  has been called “the most talented drummer of his generation” by Ira Gitler (The Biographical Encyclopedia of Jazz) and was named Jazz’s Most Valuable Player by Modern Drummer magazine in May 2009.  He is one of the most in demand drummers in the world, with one of the longest discographies in jazz, having played on over 400 records. He has performed and recorded with jazz masters including Tommy Flanagan, Ron Carter, Joe Lovano, McCoy Tyner, Cedar Walton and Dizzy Gillespie.

This is the first time Lewis has performed at the Sequoia Room; he is truly one of the world’s iconic drummers—don’t miss this opportunity to hear him!

opens in a new windowWatch & hear