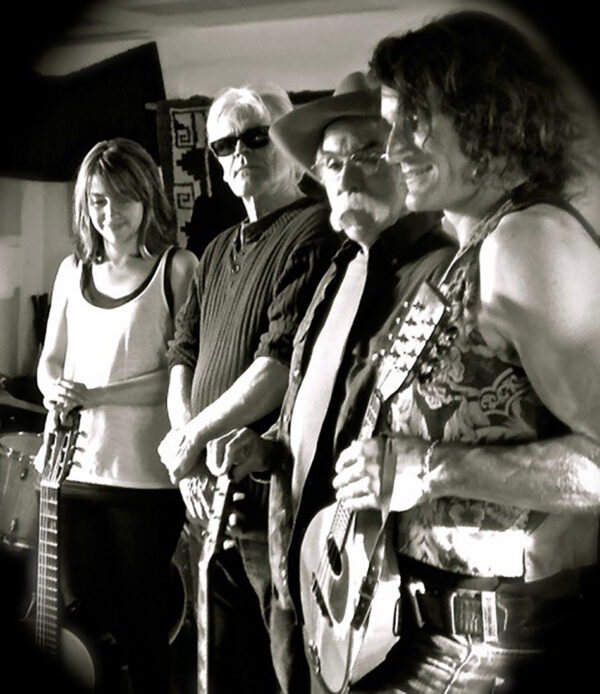 One show each evening at 7:30 pm
Each show is two 45-minute sets with an intermission

Four professionals, all veterans of the national and international music scene. Individually, each is a gifted musician, vocalist and songwriter; together they represent a collaboration of 2 generations of Mendocino County’s own. The four members of The Mendocino Quartet share a deep love of music and a joyful performance style. When they take the stage, prepare for toe-tapping, knee-slapping, hand-clapping, and finger-snapping!

Gene Parsons on guitars, banjos and vocals: a multi-instrumentalist with the Byrds and the Flying Burrito Brothers, Gene is also a veteran of hundreds of stage and studio performances including with artists such as The Rolling Stones, Randy Newman, Arlo Guthrie, Sheryl Crow, Elliott Murphy, Everly Brothers and numerous others. Gene is also the inventor of the String-Bender. Originally designed for his friend and musical compatriot Clarence White, the String-Bender is one of the most sought-after customized adaptions for electric and acoustic guitars the world over.

Gwyneth Moreland on accordion, guitars and vocals: an acclaimed songwriter and vocalist whose solo work and tours have taken her to stages all across the U.S. and a featured spot on shows such as NPR’s “Music City Roots: Live at the Loveless Cafe.” Gwyneth’s third full-length album Ceilings Floors and Open Doors and her latest, 2017’s Cider, were both heartily embraced by Folk radio, landing on the Folk charts and garnering the reviews of which an artist dreams. Both were produced by bandmate David Hayes, and Cider also features playing and vocals by Gwyneth’s Quartet bandmates.

Steven Bates on guitars, mandolin and vocals: leader of the Steven Bates Band, a favorite in clubs from Hollywood to his hometown on the Mendocino Coast, Steven is in-demand for dozens of performances every year. Steven is also a veteran of many studio sessions with producers such as Bill Bottrell and Calvin Turnbull and with musicians all along the West Coast.