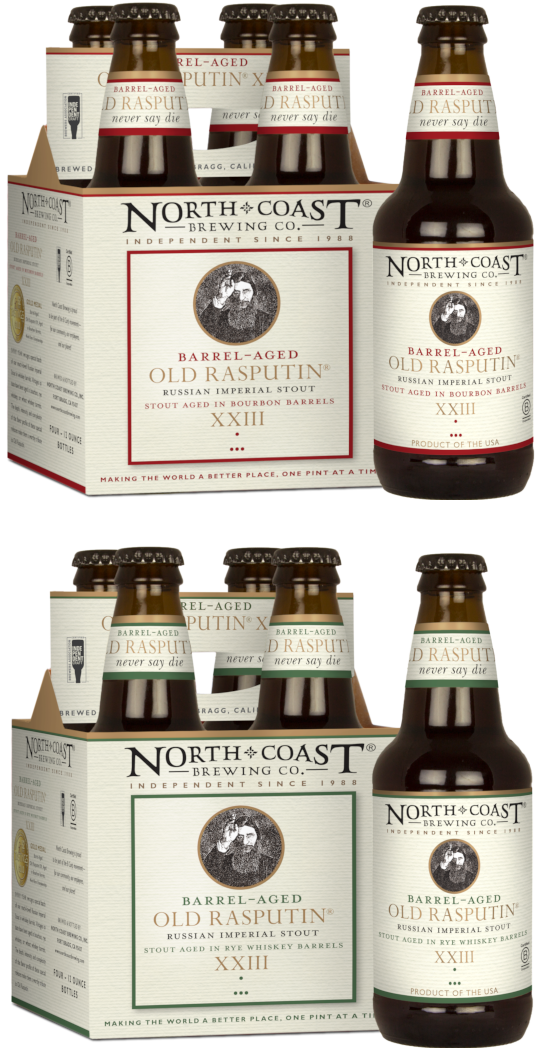 We aged special batches of our much-loved Russian Imperial Stout in Bourbon and Rye Whiskey barrels for the XXIII release. The depth, intensity, and complexity of the flavor profile of this special release, like its predecessors, make it a worthy tribute to Old Rasputin.

Brewmaster’s Tasting Notes, Bourbon Barrel Expression
The beer pours jet black with a comforting layer of toffee-colored brown foam which slowly builds and forms atop the liquid in the glass. Warm, sweet ethanol rises from the glass and greets the taster as it carries the roasted notes of the stout, along with bourbon, vanilla, and cocoa, to the nose. The bourbon character from the barrel-aging gives the beer a full-bodied creaminess that coats the mouth with warm, tingling heat. The flavor of the beer is complex. This beer obviously began its life as a stout, full of roasted flavors from the malt, but now carries the complementary sweet flavors of chocolate and vanilla mingled with the bourbon. The beer finishes well with notes of raisins and berry-like fruits.

Brewmaster’s Tasting Notes, Rye Whiskey Barrel Expression
The color of the beer is black, allowing nothing through as it is held up to the light. A generous brown layer of foam erupts upon pouring, covering the surface of the beer. As it is raised to the nose, a dusty, leathery character reminiscent of tobacco leaf accompanies the aromas of roasted grains, chocolate, and vanilla. The beer itself has a dry feel from the wood tannins of the oak barrel and is accentuated by the warm dryness of ethanol. Oak character is present in the flavor, but bittersweet chocolate nuanced with vanilla is the dominant tone. In the middle, one can perceive nuttiness, spicy rye grain notes, and licorice.