We don’t mean to brag…well, maybe we do. So we’re sharing a recent blog from the Indiana Beer group. You are welcome to read the entire article, but what follows is a summary, paraphrase and direct quotes of some of the text. You can also read about this particular tasting panel on the opens in a new windowIndiana Beer Group. 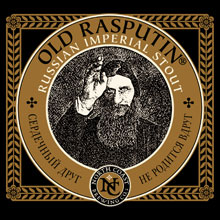 We didn’t mess around with the lineup for this tasting – each of these beers rates at least a 92 on Beer Advocate and they come from highly respected breweries: Bell’s Expedition Stout, North Coast Brewing Old Rasputin Russian Imperial Stout, Oskar Blues Ten Fidy Imperial Stout, Sierra Nevada Narwhal, and Three Floyds Dark Lord. With this lineup of heavy hitters, a blind tasting was administered by our lovely hostess Poppi Rocketts. The beers were served in a random order to our tasting panel, and the identity of each was not revealed until after the panelists had finalized their individual rankings. Joining me, Nathan Compton, on the panel were IndianaBeer reporters Dave Allen and Jason Wilkerson and guest reviewer Tim Palmer.

And the results are in…….To determine the overall results, we used a model where the lowest number of points would win (a 1st place vote = 1 point, a 2nd place vote = 2 points, etc.). After tallying up the scores, our collective rankings determined the final order: 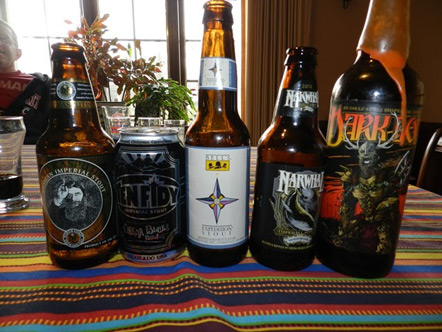 What follows are direct quotes from the Tasting Panel about Old Rasputin:

Dave: “Our tasting panel all came to the same conclusion that this one was, hands down, the best beer on the table. To my palate it was complex, balanced, with flavors of both chocolate and roasted malt, hints of coffee and apparent (but not dominating) alcohol. When I conjure up what RIS should be in my imagination: this is it – delicious without being overpowering in any of the handful of typical flavor profiles one might expect. Great beer. And readily available locally all year round at a competitive price point. What’s not to like? Would I Drink Another: Absolutely.”

Jason: “The aroma of chocolate was a welcome sign as it reminds me of this category of beer. Thicker than Beer #1 (Narwhal) but still not the texture I’ve come to expect, which is not a bad thing. Great flavor. This beer throws a knockout punch on your tongue from the start to announce its presence. Rich in color, flavor and texture, the bold taste follows from the front of your mouth to the back. A great Russian Imperial with good balance of bitter and sweet.”

Nathan: “Less head retention than the first beer (Narwhal), but the level of roasted malt character has increased and nicely balances the chocolate notes. Wonderful flavor complexity: chocolate, coffee, raisins, figs, and hints of citrus hop character. Thick mouthfeel with a fairly dry finish and lingering bitterness the complements the intense malt character. Moderate alcohol warming in the aftertaste, but never harsh or distracting from the other flavors. This beer almost perfectly embodies the best qualities I associate with Russian Imperial Stouts. Outstanding!”

Tim: “Let’s just say that I can’t see through the beer as it is dark as night with a small dark tan head. The first hints of the aroma immediately hit me as this wonderful blend of rich malt (bready, hint of fruit), roast and chocolate character followed by a low earthy hop nose. The first taste filled my mouth with this full bodied, rich, more roast (not acrid) than chocolate, complex delicious beer that finished dry leaving me asking for more. Even with the low head, it had plenty of carbonation to support this big beer. The alcohol was pleasantly warming and not hot at all. This was solid all the way through! Can I have another? This is what I was expecting from a Russian Imperial Stout.”

Near the end of the blog, Nathan wrote about rediscovering Old Rasputin:

“There was a stage in my craft beer drinking evolution where Old Rasputin was a beer I commonly sought out, and an Old Rasputin sign proudly hangs next to the pool table in our basement. But as the number of craft beer options has exploded, it’s very easy to get caught up in constantly trying new things and taking some of these old favorites for granted. I can’t remember the last time I purchased this beer off the shelf, but it certainly won’t take that long again. Along with the straight tasting results we always try to include cost analysis at the end of these because the highest ranking beers are often the most expensive. But at the relatively low price (for a Russian Imperial Stout anyway) of $10.99 for a 4-pack, this aspect only bolsters the case for Old Rasputin in this lineup…But if you’re looking for a great Russian Imperial Stout to enjoy in the near future, we can’t recommend Old Rasputin strongly enough. Buy up a good portion of that beer and horde it for yourself.”