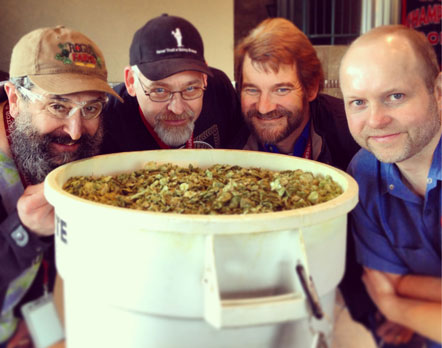 1988 was a pivotal year for the emerging craft brewing industry on the west coast, marking the founding of some of America’s most influential breweries, North Coast Brewing Co. among them. It was also the year opens in a new windowFred Eckhardt published The Essentials of Beer Style—a book that quickly became an indispensable reference for aspiring brewers and critics.

In recognition of the 25th anniversary of this milestone year, North Coast Brewing and two other west coast members of the pioneering “Class of ’88,”—Rogue Ales and Deschutes Brewery—have collaborated on a trio of commemorative beers evolving from Fred’s style guidelines.

Each of the breweries has created its own distinctive interpretation of a barleywine. Brewers traveled to each other’s locations and teamed up to brew all three ales. Their common heritage, joint efforts and inherent camaraderie resulted in a cohesive set that allows beer aficionados to enjoy three examples of the style.

These exceptional barleywines are being released in late March of 2013 and are available around the country for a limited time, distinctively packaged in either 22 oz. or 750 ml bottles, or on draft. The breweries are planning Class of ’88 celebrations in Bend and Portland, Oregon and San Francisco and Fort Bragg, California. Read more to find out about these events.