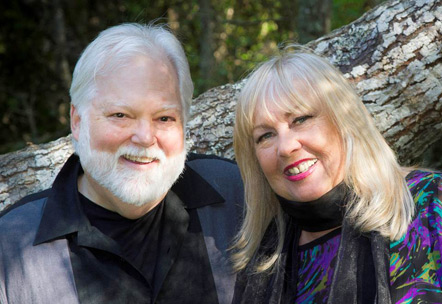 The husband-wife team of Bobbe Norris on vocals and Larry Dunlap on piano will present an exciting program of standards from the Great American Songbook, and Jazz, Brazilian and original music on Saturday, August 16. Their music is sensitively arranged and adventurous, resulting in performances that are full of surprises.

Originally from San Francisco, Norris pursued a widely publicized singing career in New York where she worked the major clubs and concert halls, recorded for Columbia Records, and appeared on television on the Ed Sullivan and Tonight shows (among others). Norris is a singer who applies her dusky contralto to carefully chosen songs. Longtime fan Rex Reed has written that, “…she reaches into a lyric like she’s pulling taffy and brings out the sweetness and rich flavor of each song, discarding anything superfluous or sticky.”

Dunlap is an extraordinary pianist and arranger, a player with taste and sophistication. Besides his ongoing career with Norris, he has served as pianist for the British diva Cleo Laine since 1983 and has performed and/or recorded with such luminaries as Mark Murphy, Joe Williams and Sheila Jordan as well as jazz instrumentalists Gerry Mulligan, Art Farmer, and Marc Johnson, to name a few.

As their numerous recordings and appearances at such venues as the Monterey and San Francisco Jazz Festivals have shown, together Norris and Dunlap offer a classy show of great music in their own style, infusing each song with romantic elegance and creative fire.

This Dinner Jazz performance on Saturday, August 16,  is at North Coast Brewing Company’s Sequoia Room in the Brewery Taproom at 444 N Main Street, corner of Main & Pine, in Fort Bragg.