Why Pilsner is the Best Craft Beer of All Time: So Many Reasons to Love Pilsners

By John Verive of Beer of Tomorrow for Menuism Beer Blog

As craft beer gains popularity, tap lists grow longer, and beers become more creative and extreme, it sometimes seems that a craft beer fan can have too many options. It may be a wonderful problem to face, but if you’d rather not struggle deciding what beer to try there’s a simple solution. If you just want a satisfying and restorative beer, try a pilsner. The classic golden lager makes for an excellent start to a session, is great before a meal, and pilsners pair wonderfully with many foods. It’s an easy call; try one and see why the pilsner is considered by many brewers to be “the brewer’s beer.”

If you’re not yet a convert to the well-crafted and balanced pilsners, forget your preconceived notions about the style. Pilsner, or simply pils, is known for its delicate color, sparkling carbonation, bready malt body, and spicy and herbal hop character and aroma that is highlighted by a dry, crisp finish. The style was so popular after its invention in 19th-century Bohemia that it swept through Europe before it was taken across the Atlantic by brewers immigrating to America. The American pilsner started off like its continental counterpart: balanced, dry, and with an assertive hop aroma, but American breweries diminished the beer to appeal to a wider audience, and soon the American Pilsner developed into the bland, insipid beer that many people think of today. 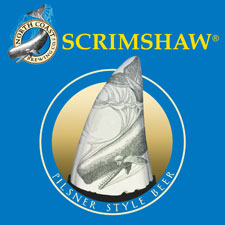 When first arriving at a bar, I’ll often skim the tap list for a craft pilsner instead of suffering through the analysis paralysis that an impressively long and varied beer list can induce. Once the aromatic pils is in hand, I can more carefully review the menu and tap list for perfect pairings while I enjoy the crisp, refreshing qualities that the pilsner is prized for. Starting off the night with a pilsner works well for a few reasons. It’s commonly recommended to begin a tasting session with a beer that is comparatively light in body and flavor. This allows you to experience the beer’s more subtle flavors before your palate becomes fatigued, and pilsners make excellent “warm-up beers.” The lager’s lively carbonation awakens your taste buds, and the delicate flavors of the signature pilsner malt and European hops are best enjoyed before your palate has been assaulted by massive double IPAs. Picking out these flavors from such a balanced and nuanced brew is a great way to prepare yourself for tasting other brews, and the clean, ester-free finish leaves your palate primed for another sip (or another pint).